There was an extreme need for free medical camp in his slum area of Kurla West due to the lack of healthcare facilities. The slum development in and around Kurla are uncountable. The nearest basic health requirements are far from the reach of the poor man. Majority of the women and children are malnourished and suffering from diseases but cannot afford proper treatment. The NDF team gathered in with the doctors of K.E.M & Kurla Bhabha Hospital and had a medical camp on 6th November,2012 Tuesday.

Medical team started checking patients immediately after its arrival at the camp premises located at a Shaukat Hall in Kurla West. Patients had been waiting for the free medical camp had been announced a several times a day in the local community for the previous three days.  Most of the cases reported were anemia, acute and chronic gastric problems, malnutrition and resulting diseases, upper & lower respiratory tract infections, skin diseases, and obstetric & gynecological problems.

A total of 540 patients (women & children) suffering from a variety of diseases were medically assessed by the pediatricians and gynecologists'. The camp was extremely successful. We had to wind up earlier than the usual time as all our stock of medicines was entirely exhausted. 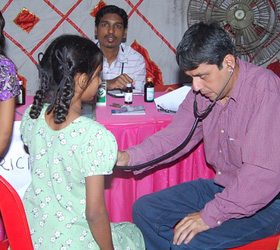