India, August 15, 2010: In India 1,00,000 women are affected by breast cancer every year; a staggering number that has overtaken cervical cancer to become the leading cause for death among women in metropolitan cities. According to theIndian Council of Medical Research (ICMR) this number will progress to 2,50,000 cases by the end of 2015 resulting in an increase in the incidence of cancer related mortality to 33% among women.

1 a minute, a UniGlobe Entertainment production, directed by Namrata Singh Gujral is striving to create awareness about breast cancer through the celebrity survivor testimonials in the movie in exclusive partnership with The Nargis Dutt Memorial Charitable Trust (NDMCT) in India and various other NGO's globally.

On 29th October 2010, a select city theatrical release by UniGlobe Entertainment and PVR with an exclusive India charity partnership with The Nargis Dutt Memorial Charitable Trust (NDMCT), will showcase the film and illuminate this cause. Portion of profits from each ticket sale of "1 a Minute" will be donated to NDMCT. The aim of the film's release will be to raise awareness and funds to support the social cause in India.

"1 a Minute is an unprecedented push by celebrated women across the globe, who are also cancer survivors, to raise funds to help find the cure, promote awareness and support the survivors of this form of cancer. The movie follows a woman's journey through cancer with a focus on Breast Cancer, the most frequently diagnosed cancer in women worldwide. At each stage of her journey, our stars recount their experiences to personalize the journey. The film is a hybrid between narrative structure and documentary style which interweaves throughout the plot. "We are delighted to be associated with foundations like the Nargis Dutt Memorial Charitable Trust and Susan G. Komen for the Cure" Said Namrata Singh Gujral, President, UniGlobe Entertainment.

Speaking on the alarming increase in number of women suffering from Breast Cancer, Namrata Singh Gujral, President, UniGlobe Entertainment said "In the West where women seek early medical attention more than 80% of breast cancers are treated at Stage-1 (50%) or stage-2 (30%) and the cure rates are 70% to 80%. In India more than 70% of the Breast cancers are far advanced (stage-3 and 4) by the time women seek medical attention and the cure rates are less than 30-40%."

Speaking about the trust and the association Priya Dutt, said, "I am just fulfilling, the dream that my parents had seen and started; to provide medical facility to our people in India to bring a smile to the patients and their family. Especially those families who cannot afford this specialized kind of treatment, that my father could give my mother. We do all that is possible through Nargis Dutt Memorial Charity Trust to keep this dream alive. We welcome all of you who would like to contribute and live this dream, along with the Nargis Dutt Memorial Charity Trust family"

The film will release in the Indian theaters on 29th October. 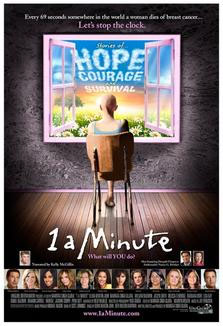